Today, the mycotoxin challenge is greater than ever. Enzyme inactivation presents a selective and efficient solution to this growing problem.

The rapid growth of the world population is associated with an increase in the production of food of plant and animal origin.

In this situation, food safety continues to be the key element to face the growing needs of the market to continue producing safe food.

Today, more than 70% of the world’s cereal production is focused on animal feed. The quality of the raw materials to produce animal feed is a key element for improving intestinal health and, consequently, improving animal productivity.

Impact of the conflict between Ukraine and Russia

All this has forced the Ministry of Agriculture, Fisheries and Food to temporarily relax the phytosanitary requirements for the importation of corn from new suppliers from third countries, facilitating the arrival of raw materials for animal feed, guaranteeing the supply of the sector rancher.

The opening to the importation of raw materials from new supplier countries allows to guarantee the supply to the livestock sector, but this increases the risk of food security due to the potential contamination of the grains with different species of fungi due to the fact that they travel long distances by ship with changes in humidity and climate, all combined with the great adaptability of these fungi, have increased their prevalence.

Contamination of grains with fungi is not only a problem in itself, but under certain environmental conditions (temperature, availability of oxygen and humidity) they will produce mycotoxins.

Mycotoxins are compounds with a diverse chemical structure, generally of low molecular weight, produced by many species of fungi, the main ones being Aspergillus, Penicillium and Fusarium.

These fungi and their mycotoxins affect the quality of raw materials causing global economic losses in the millions.

Both fungal contamination and the subsequent production of mycotoxins are closely related to factors such as humidity, temperature, of oxygen and grain quality (Table 1).

Therefore, if a higher quality of the harvesting process, processing, transport and storage of grain is guaranteed, it will reduce the probability of production of mycotoxins by fungi during the post-harvest period.

It is vital to know the prevalence of mycotoxins in different areas and their seasonality.

Table 1. Mycotoxins, fungi producing and conditions for their development.

What do mycotoxins cause?

Animals that ingest food contaminated with mycotoxins can cause acute or chronic conditions, ranging from decreases in their production parameters to severe ulcers and mortality.

Although the most common consequences of the ingestion of mycotoxins are the decrease in animal immunity and alterations in intestinal health, causing lower animal production.

Annual monetary losses from mycotoxin contamination of grains are estimated at US$ 900 million per year.

The main objective is to achieve greater intestinal health to achieve an adequate development of the intestinal microflora and thus be able to obtain better animal health and better productive results. 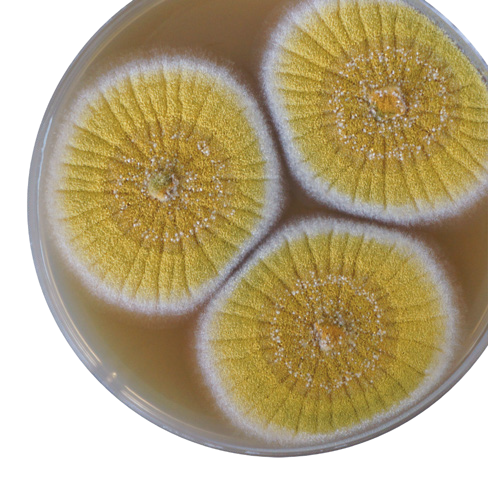 What types of mycotoxins are there and what can each one cause?

On many occasions it must be taken into account that one or several foods are contaminated with several mycotoxins, the contaminations are usually combined.

It is important to note that these contaminations with more than one mycotoxin can generate enhanced negative effects.

What can we do to prevent and/or deal with mycotoxins?

If the world has a vast variety of mycotoxins, fortunately we also have a wide variety of control methods to deal with them.

These methods and treatments range from good agricultural, transport and storage practices, to the availability on the market of enzymatic products with a high technological value that inhibit the negative effects they have on animals.

For example, fungal growth-inhibiting acids and mineral adsorbents have historically been the main strategy for mycotoxin control; however, technological improvements have made it possible to obtain new control perspectives in animal production.

Fungal inhibitors prevent the growth of fungi and, consequently, the formation of mycotoxins during grain storage, while absorbents operate effectively in the elimination of mycotoxins in the digestive tract of animals since absorption is mainly done by polarity (ionic charge of molecules).

Enzyme inactivation mechanisms have proven to be an effective solution for the detoxification of mycotoxins, which are poorly controlled by traditional methods in animal production.

Studies in the areas of microbiology and enzymology have led to the discovery of enzymes produced by microorganisms capable of catabolizing mycotoxins.

Enzymes are specific in that they catalyze specific chemical reactions at specific sites on molecules.

At the same time, enzyme activity also depends on environmental characteristics such as temperature, pH, or activators and inhibitors in the environment.

There are enzymes that are specific for the inactivation of relevant mycotoxins in the production of monogastric animals.

For all this, the Detoxa Plus® product was developed, which is an effective and safe enzymatic inactivation agent that targets a variety of mycotoxins that are commonly found in animal feed, and is specifically formulated for the control of the most frequent mycotoxins in feeds for monogastric animals. 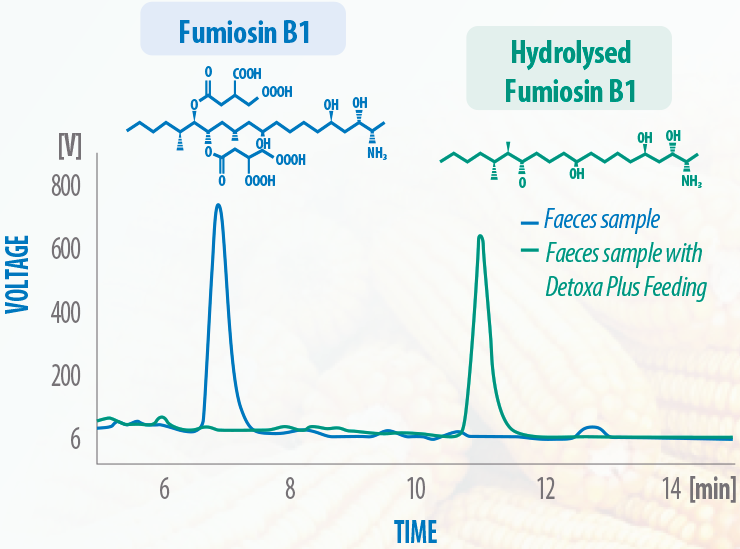 Enzymatic inactivation of mycotoxins is the best method to control the ever present problem of mycotoxin contamination of feeds. Detoxa Plus® offers a guaranteed inactivation efficiency for the most problematic and predominant mycotoxins currently in animal feed. 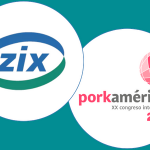